Compare with Other Recurve Bows

I spent some time doing research while looking for a very high quality bow for hunting, and it was difficult for me not to see the Martin Hunter recurve mentioned a few times. I had already used the Hoyt Buffalo which I knew to be awesome, but I was looking for something a little bit more affordable and which would deliver the same (or very similar) quality. $600 at my local Cabelas seemed like a good enough price tag to me, though this definitely shouldn’t be considered a budget purchase.

Was hoping that I could purchase a Martin Hunter kit, but unfortunately I wasn’t able to find one. No biggie, though it would have been nice to get it with a glove and arm guard as mine were sort of worn off and was looking for new ones back then. This wasn’t going to deter me though, particularly since I consider myself somewhat of a maniac when it comes to traditional archery – I really NEED to own every bow available, even if just for a little while.

The Martin Hunter has been in production since around 1962, and its basic design has stayed very consistent since then – Martin basically adheres to the “if it ain’t broken, don’t change it” policy, and I’m fine with that. The Bear® Grizzly is another excellent example of this policy in action, if you’re interested in giving it a try.

The picture at the top of this page really doesn’t do this Martin any justice. In reality, it looks much better than any other hunting bow I’ve ever seen, barring the Hoyt Buffalo perhaps. The bow is called “Hunter,” but please don’t let that fool you – any recurve that is appropriate for hunting can be used for target practice just as well. In the case of this particular bow, this is even more true; the Hunter weighs as little as 2.1 pounds, so you can carry it with you anywhere and shoot it as long as you want without getting tired, given a little practice.

When you purchase the Martin Hunter, you’ll get the following:

The bow has a very symmetrical look to it, meaning that both the upper and bottom part are identical. It’s very smooth to the touch and there are no rough spots or inconsistencies, be it in the riser or the limbs. To give you a better idea of what it is that has made archers stick to this bow for more than half a century and recommend it to one another, here is a short video uploaded by Martin Archery, and which shows the making of the Hunter in progress:

Please keep in mind that the Martin Hunter recurve is NOT a takedown bow; you cannot unscrew the limbs from the riser, therefore you must be extra careful when storing your bow – I recommend removing the string every time the Hunter is not in use. It might seem tedious at first to reattach the string every time you want to take the bow out for some shooting, however trust me when I say that you’ll get the hang of it very quickly, and realize that this is a skill you really need to learn sooner or later. Click here to see the Hunter’s construction.

The string provided with the Hunter recurve was just the appropriate length, and I didn’t feel like I had to twist it onto the tips too many times to achieve a ~7 inch brace height (the distance from the string to the riser after the bow is strung). I immediately attached the arrow plate which came with the bow, and within around 15 minutes of opening the package my Martin was ready for use.

After having spent a good $600 to get the Martin Hunter, I was really hoping for some quality performance – and I wasn’t disappointed. The first thing that stood out to me was the grip, and I’m really not exaggerating when I say that it is the most comfortable bow I have ever held. Even at full draw, I did not feel any type of focused pressure; it was spread out evenly across the entire palm. I think that this is thanks to a very unique grip design comprised of many different curves that together form an exceptionally comfortable surface.

I wanted to mention that the string that came with the bow had adequate thickness; I tried many different types of arrows with various nocks, and I didn’t experience any looseness anywhere – the string held the arrow firmly, but released it effortlessly when the time came. 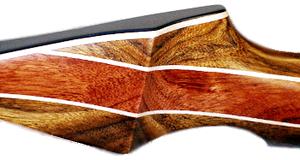 During the draw, I did not experience any stacking at all. My draw length is 28 inches exactly, and despite my Martin Hunter being a 55 lbs., it drew effortlessly and with very consistent force. This is great news for beginner as well as older archers who would like to use a powerful bow but need to avoid straining their muscles and shoulders unnecessarily.

Most of the time when I’m trying out a new recurve bow, I need to try out a few different brace heights to finally get the right one for me (you do that by increasing or reducing the number of string “twists” at the tip of the bow). With the Martin Hunter, I tried a few different brace heights and I didn’t notice any particular difference between them – they all performed equally well. This again is great news for beginners who will probably want to avoid the somewhat dull (sometimes) process of tuning your bow. You just attach the string and you’re ready to rock.

Once You Release The Arrow…

I shot it from 40 yards and got really consistent arrow groupings – around 5 inches. I’m of course somewhat experienced compared to the average person, however to give you an example, my brother – who had never shot any sort of bow before – tried it out, and within around an hour she was shooting very tight groups from a 20 yard range. The Martin Hunter is very forgiving and you’ll squeeze out some great performance even if your form and grip aren’t perfect at all. 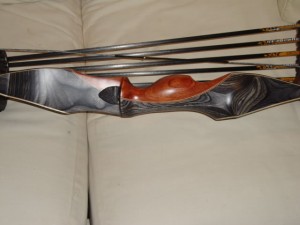 The arrows I shot had a very straight line of flight, and flew at a little over 175 feet per second – a great result for a recurve bow. I did not feel any vibrations whatsoever upon release, and the Hunter never seemed to have a mind of its own – it’s hard to explain, but it’s a little as if it “instinctively” knew what I wanted to do with it and did everything in its power to make the task as easy to accomplish as possible. In other words, I didn’t have to wrestle this bow – it was like a friend that wanted to help me.

While shooting from the 40 and 50+ range, the arrows still traveled so fiercely and dug so deep into the target that I actually had some trouble removing them. If power is what you’re looking for, then this bow has tons of it and then some…

Hunting With The Martin Hunter

I haven’t had a chance yet to take it out hunting, and it will probably be another few months before I get to do it. However, judging by the sheer power of this bow, and comparing it to to other recurves that I’ve hunted with in the past, I’m more than certain it will crush bones and do as advertised – take down the biggest game from even the largest distance.

This is an all-around excellent recurve bow, and will be treasured by anyone who buys it, regardless of their level of experience and/or what they plan to use the bow for. If  you have the budget for it, then it’s pretty much a super-safe pick. For many people the Martin Hunter has become their “go-to” bow; the one that has replaced every other one they’ve previously owned. Once you get it, expect to fall in love immediately – and expect every one of your friends who gets a chance to shoot it, to ask you whether they could borrow it from you, if only for a little while.

Now that you know all you need to know, I recommend taking a moment to check out Today's Amazon.com price on the Martin Hunter.