Being one of the most respected and innovative manufacturers in the entire industry, Bear Archery‘s Grizzly simply can’t disappoint you. Granted, it’s not a bow for everyone, what with the relatively steep price. There are reasons why it costs so much though, and I’m going to go through them in this review. Actually, let me just save you some time and say this right now: if you have the funds for it, buy it. Plain and simple. OK, I really had to say that. Now, let me explain why I said it.

This title above wasn’t just made up – it is actually what the Bear Grizzly is referred to within the archery community. The bow has one of the finest custom-crafted limbs and riser ever made, and northern hardwood is what they are made from. So if you’re worried that the limbs might twist on you for some reason, you can feel perfectly safe that with this particular bow it is NOT going to happen unless you seriously mistreat the bow. 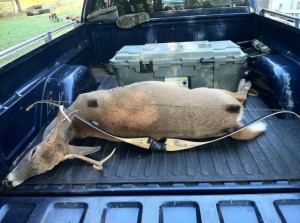 A deer taken down by the Bear Grizzly

Standing at 58″ tall, you can use the Grizzly for both target shooting as well as hunting– it’s accurate enough to handle both equally well, while still being light enough that your arms and back will not start aching after a long session at the range.  I think that the 58″ is basically the sweet spot when it comes to providing the perfect balance between hunting and target shooting – at least where a recurve is concerned.

Design & Appearance Of The Bear Grizzly

The design of this bow is just phenomenal, you simply won’t be able to keep your eyes off of it! It is I believe the most handsome recurve bow I have ever seen, matched only by the PSE Blackhawk. BEWARE: it will likely make any recurve bows you own pale in comparison. Let’s get to the meat of this review though.

The Grizzly riser features a really well-balanced and positioned shelf (covered with natural Bear hair), the type that makes even the least experienced archer appear to be a pretty good shot. Most people who tried this bow report a noticeable improvement in arrow grouping (this refers to how close together the arrows land after being shot – the closer, the more consistent a bow and the shooter usually are), and I personally think that its accuracy is on par with the more advanced AND  more expensive compound bows. There’s more though.

If you aren’t sure what kind of draw weight is right for you, check out my Recurve Bow Draw Weight Chart to settle this matter.

Something I would really like to highlight in this Grizzly review is the quality of the limbs. The finish on them is glossy and quite remarkable really – it does a great job at preventing the limbs from absorbing moisture, and reinforces the already sturdy construction even further.  During the draw phase, you can really feel the limbs at work, doing the best they can to channel as much energy into the string as possible. I realize this sounds kind of cheesy, but that’s just how I felt when holding it. The string on the Bear Grizzly deserves a mention too. Unlike most other recurve bows in this price range, which usually come with a string of such poor quality that you need to replace it immediately, the Grizzly is perfect ‘out o the box” – and that includes the string. I’ll say even more: this is the only recurve in this price range that I’ve ever owned which I didn’t feel like I had to improve upon by buying additional accessories. Everything was spot on from the moment I opened the carton.

As I’ve already mentioned, the accuracy on the Bear Grizzly is comparable to what you would expect from a high quality compound. Also, and for a bow that is as durable as this, it is really light and weighs only 2-or-so pounds. So if you’re a beginner, worried that it might feel too heavy for you, stop worrying right now. In fact, I would say that this is a perfect recurve for you, providing of course that money isn’t an issue – if it is, then there are a few wonderful cheaper bows that I discuss on this page. I would like to take a moment to quote a fellow archer, who expressed the nature of the Grizzly beast in a few beautiful words:

My wife surprised me with a Grizzly recurve from Cabelas a couple of years ago. I had always wanted a recurve, but was a little apprehensive about shooting without sights, only having experience with compound bows. Now that I have had this bow for some time, I can say that I will probably never own another compound bow (in fact, I no longer have my compound). Learning to shoot instinctively has proven to be very easy and a lot of fun.

How Loud Is The Bear Grizzly?

Surprisingly enough, I didn’t notice any vibrations or hear any noise drawing the string and shooting. I say “surprisingly” because I was expecting a little bit of both due to the somewhat unusual curve at the tips of the limbs. Turns out though that the design is perfect, and I’m guessing it’s one of the reasons why this bow is so accurate and precise.

Hunting With The Grizzly

It isn’t called the “Grizzly” for no reason. In fact, I’ve seen reports of people easily taking down bear and elk with this piece of equipment. The lack of vibrations / noise make it quite easy to sneak up on your prey without being noticed, and the inherent precision and reliability will make it so that you rarely miss a shot. The grizzly is also VERY small and light, making it one of the most maneuverable recurve bows on the market. Also, make sure to read: how much draw weight do you need – which explains some things a beginner needs to know. There’s one thing to remember though: If you want to hunt with this bow, pick one with a 40+ pound draw minimum. You’ll need the extra energy to pierce those targets from the 20+ yard distance. If you’re looking for cheaper bows than this, then you should check out my recurve bow comparison chart, where I list the finest bows from every price range.

I may be sounding like a broken record by now, but I’ll say it again: if you can afford it, just get it. Or at least find a friend who can let you shoot it for a few minutes, as that will be more than enough for you to understand why I’m in so much love with this recurve. Feel free to check out Amazon.com’s current price on on the Bear Grizzly. Good luck and happy hunting / target shooting!