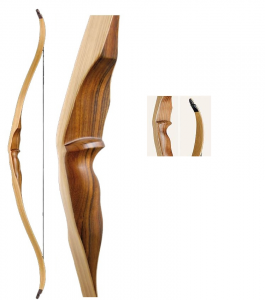 Hi there, archers! Today we are going to take a closer look at the Ragim Brown Bear. It is one of the latest offerings of Ragim – an Italian company, which is relatively new on the market. For the last several years they have 6managed to keep up with the competition with their simple, but sturdy designs. Their products are usually the choice of intermediate shooters, as for such prices the bows are surprisingly reliable.

What are the Brown Bear Series?

The name sounds somewhat ominous and for a good reason – the Brown Bear is a hunting bow. With a length of 58’’ and weight of 2.4 pounds, it is more than capable of serving such a purpose. It is designed as one-piece recurve bow with a simple-shaped wood riser, an aradius shelf and a very stable gripping space.

Power and accuracy – are they balanced?

The power of the bow turned out to be substantial – it pierced the whole 5 inch target from a distance of 25 yards. It is something I have rarely seen in my other experiments. However, after taking several shots from a longer distance I started to think that this power is somewhat offset by a reduction in accuracy. After 3’’ groupings from 35 yards I was definitely sure – the bow is designed to be only for hunting.

Of course, that depends a lot on the configuration you decide to use. The draw weights vary in increments from 25# to 60#. The sheer power of the latter numbers shows that the bow can satisfy the requirements of the most serious of hunters, reaching twice the threshold of the average recurve bow.

Is it the design vintage or modern? 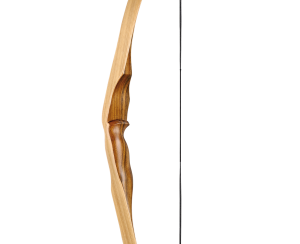 One look at the bow was enough to convince me that it is a very popular choice amongst traditional archers. The whole body, the riser and the glass limbs are manufactured in a way that resembles a primitive Indian hunting bow, with a thicker body in the middle for stronger piercing power. However, modern technology has enhanced it with some nice features – a pretty wide space for the arrowhead helped my accuracy a lot. Also, the machine sculptured handle enhances the balance and stability during shooting and allows for a faster reload. The bow is without a doubt a good mix between authenticity and practice.

How about taking it for a hunt?

With draw weights up to 60# you can surely take this bow for hunting larger animals. Its piercing power is significant and depending on the draw weight you catch game of any size. However, for me it didn’t give a good chance to shoot at birds, as the weight of the bow was a little too much and didn’t allow me to aim fast.

Comparing it to others – more pros than cons?

In comparison to some of the other bows we reviewed, the Ragim 2013 definitely has its advantages. You have a much higher chance of hunting bigger game, without having to worry that the arrow won’t pierce skin and bones. However, the accuracy is definitely impeded by such power. Compared to other choices, such as Optima Heritage for example, it can look rather clumsy. I think that this con is offset by the fact that the design allows for arrows with plastic vanes and spin wings – something almost unthinkable for the Optima.

Is The Bow Suitable For Beginners? 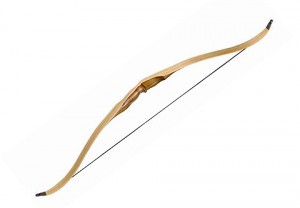 At least for me the answer should definitely be negative. The 58’’ length is pretty standard, but the reduced accuracy and the draw weight can impede the learning process for a beginner. It will be definitely hard for an adolescent to pull the string to the maximum and will impair their ability to remain stable during aiming.

Of course, this statement refers to beginners in the sphere of professional archery. When it comes to hunters on the other hand, things are different. The budget for the bow is not too high and it is quite sturdy. This allows for easy exploitation in a forest region and reduces the chances of damages. Furthermore, since the aiming requires a little more skill with such a bow, managing to master this model from the very beginning will give higher rewards in the long term.

It is important to mention that a beginner should never start practicing on larger game. This type of bow requires for the hunter to draw the animal near them, in order to be able to pierce its skull, which can be dangerous for an inexperienced shooter.

Arrows For The Ragim 2013 Brown Bear

After giving a shot to several types of arrows, I can only say that one of the strongest advantages of the Brown Bear is that it is suitable for almost any type of arrow. The sight window has a higher clearance, which gives the opportunity to use spin wings. Plastic vanes were a little bit more controversial, yet I managed to get a similar accuracy rating without much effort.

How comfortable is it?

As mentioned in the beginning, the machine sculptured handle allows for a very high degree of comfort. I think that the problems with accuracy I got after 35 yards is because of the high draw weight I was using. Apart from that, the average size and the arrow space allow for a pretty good aim if you are standing in one place – something that can turn out to be quite helpful during a hunt.

I hope you got a basic idea about the virtues of the Ragim 2013 Brown Bear. The experience of shooting with such a heavy bow was definitely satisfactory. As much as accurate marksmanship brings me pleasure, seeing the target just recoil on the ground after a shot, was even more fulfilling. The bow is definitely a good fit for hunting dilettantes, combining a sturdy design and an adequate degree of accuracy. Take a look at Today's Amazon.com price on the Ragim Brown Bear if you’re interested. 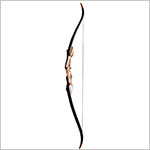 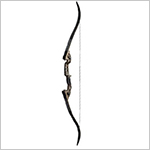 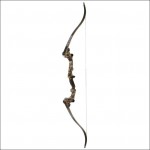